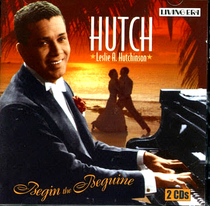 Singer and pianist who performed under the name of 'Hutch'. Born Leslie Arthur Julien Hutchinson in Gouyave, Grenada. He moved to New York with the intention of studying medicine, but started singing and playing in bars instead. He came to London in 1927 and rapidly became one of the biggest stars of the era. Even though he appeared at lavish venues, racial discrimination obliged him to enter them by the servants' entrance. His 'physique' also made him popular with many leading celebrities of the day, with Cole Porter, Ivor Novello and Tallulah Bankhead being among his reputed lovers. It was his supposed liaison with Edwina Mountbatten that led to his downfall. The 'affaire' threatened the reputation of the royal family, and after an article was published in the 'People' newspaper, King George V put pressure on the Mountbattens to sue for libel. As his career declined he squandered the millions he had made and died in near poverty at the New End Hospital, Hampstead. The Camden New Journal has some more information.

This section lists the memorials where the subject on this page is commemorated:
Leslie Hutchinson