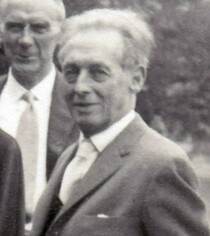 Sculptor. Andrew Behan has kindly provided this research: Leslie Cubitt Bevis was born on 29 May 1892 in Maidstone, Kent, the youngest of the three children of William Fish Foster Bevis (1860-1946) and Anne Emily Bevis née Gostling (1852-1934). His father was an artificial stone manufacturer.

He enlisted as a private in the 28th (County of London) Battalion, The London Regiment (Artists' Rifles). His service number was 2980 and this would indicate he enlisted around November/December 1914. He entered France on 27 March 1915 and was commissioned as a Temporary Lieutenant in the 2nd Battalion, Highland Light Infantry on 23 October 1915 and was Mentioned in Despatches. He was injured and was subsequently treated at the Central Military Hospital for Officers in Brighton, Sussex. After the war he was awarded the 1914-1915 Star, the British War Medal 1914-1918 and the Victory Medal and these were sent to him, together with the M.I.D. emblem to his home at 'Homermead', Greenhithe, Kent.

Electoral registers for 1923 show him at 6 Margravine Gardens, Fulham.

In 1926 he married Margaret Beatrice Shaw in Bedford, Bedfordshire, but later they divorced.

The 1939 England and Wales Register shows him as an Army Emergency Reserve Officer at 77 Newman Street, Marylebone, together with a Gertrude Anna Luise Rahn, a companion helper, and Josef Scheckner, a physician.

He died, aged 91 years, on 23 May 1984. Probate records show that his address had been 4 Birdhurst Road, South Croydon, Surrey and that administration was granted on 4 January 1985, his estate not exceeding £40,000.

Contrary to something we'd read somewhere Andrew could find no evidence that LCB was a descendant of Thomas Cubitt. He traced the lineage back as follows:

Martha Cubitt married a William Gostling and they had nine children, one of which was an Anne Emily Gostling (1852-1934). (She was recorded on the 1901 census as Emily Anne Bevis and just Emily Bevis on the 1911 census but her birth and death registrations were as Anne Emily).

There is a fine drawing of LCB in 1921 at Ingram. Our photo, which shows him in September 1963, has kindly been provided by his great niece and her husband, Beth and John Charles.

This section lists the memorials created by the subject on this page:
Leslie Cubitt Bevis