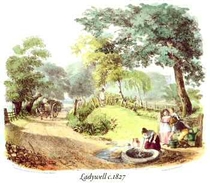 The name was first recorded in the 15th century, and maps of this period show it was located in front of the area now occupied by Ladywell railway station. It was probably a holy well dedicated to the Virgin Mary. It was eventually covered over as part of the construction of sewer works. its coping stones were later uncovered during work to underpin the railway bridge, and in 1896 these were incorporated as part of the fountain that stood in the grounds of the Ladywell public baths, Playtower, but now (2020) seem to be lost.

Careful not to confuse this Lady Well with the nearby Ladywell Mineral Spring.

2020: LondonNewsOnline, our Picture source, reported on research carried out by local historian Robert Smith. Another plaque has been found in nearby St Mary’s church "More recently a plaque was discovered in the crypt marked simply The Well 1855 possibly prepared prior to the well’s demise around this date. Or could it refer to a well revealed in the church crypt after renovation works early this millennium." That website has a map showing the position of the well.

This section lists the memorials where the subject on this page is commemorated:
Lady Well

A building that housed an ancient spring supplying water to Westminster Abbey...