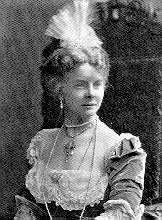 Lucy Agnes Turner was born on 14 November 1847 at The Grove, Yoxford, Suffolk, (now called Grove Park, Yoxford, Saxmundham, IP17 3HX), the youngest of the seven children of Thomas Metcalfe Blois Turner (1809-1847) and Herbetina Turner née Compton (1816-1913). Her father was a captain in the Bombay Engineers of the East India Company Service and who died in Bombay (now Mumbai), India, some four months before she was born. Her mother was the daughter of Sir Herbert Compton, lord chief justice of Bombay. On 12 December 1847 she was baptised in Yoxford, Suffolk.

In the 1851 census she is shown as living at 25 Curzon Street, Westminster, with her widowed mother, who was described as an annuitant, two siblings: Herbert Charles Turner (1842-1895) and Samuel Compton Turner (1846-1900), together with a cook and nurse.

The 1861 census shows her as a scholar living at 4 Marlborough Terrace, Victoria Road, Kensington, with her mother, two siblings Grace Eliza Turner (1841-1899) and Samuel, together with two female general domestic servants.

The 1891 census shows her living at Graeme's Dyke (later called Grim's Dyke), Old Redding, Harrow, Middlesex, with her husband together with a butler, a housekeeper, a lady's maid, a housemaid, an under-housemaid, a kitchen maid and a footman.

On 15 July 1907 her husband was knighted and she became Lady Lucy Gilbert.

In the 1911 census she is shown as living at 90 Eaton Square, Westminster, with her husband and a Nancy McIntosh (1866-1954) who was described as a visitor, single, aged 55 years, an American who had been born in Cleveland, Ohio, USA, together with a butler, a lady's maid, a cook, two housemaids, two footmen, a kitchen-maid and a scullery-maid.

Her husband died on 29 May 1911 at Grim's Dyke and she too died there, aged 89 years, on 12 December 1936 and was buried on 16 December 1936 in the churchyard of St John the Evangelist Church, Rectory Lane, Stanmore, HA7 4AQ. In probate records she is described as Dame Lucy Agnes Gilbert. Probate was granted on 8 March 1937 to her spinster companion, Nancy Isobel McIntosh and to stockbroker Gerald Edward Victor Crutchley. Her effects totalled £66,670-17s-4d.

This section lists the memorials created by the subject on this page:
Lady Lucy Gilbert

one unknown yet well known

This brainteasing benefactor presents us with an enigma.  Searching the web w...

Thomas Charles Hudson was born on 2 September 1816 in Harrow, Middlesex, a so...