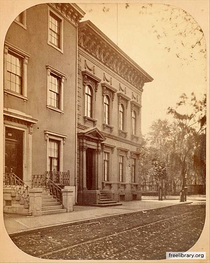 Aided by Andrew Behan we have found two candidates for the Lady Kortright who gave the funds to the Grosvenor Hospital but cannot conclusively identify her. See what you think…

One candidate is the rich and generous Lady Martha Ellen Kortright (d.1907). She is the lady referred to in the 9 August 1889 Fort Morgan Times, the 22 April 1889 New York Times, the 2 November 1861 New York Times, the 1907 post-death catalogue of her pictures for sale, and a book about her Philadelphia home, Rittenhouse Square.

She was the daughter of John Richardson, an Englishman who went to Philadelphia as a young man and rose to become the President of the Bank of North America for 30 years. She inherited great wealth and on 30 October 1861 in Philadelphia she married the boy next door, who went on to become Sir Charles Edward Keith Kortright, British consul at Philadelphia (died by 1889). She made a number of generous donations to the Presbyterian Hospital of Philadelphia as a memorial to her father. In 1889 she was resident in England and visiting Philadelphia. On 14 June 1907 Christie's auctioned off her collection of old masters and described her as deceased, late of 2 Grosvenor Crescent.

Paintings were made of this Lady Kortright, but we can't find them on-line, so we show a photo of her married home in Philadelphia instead.

Andrew’s research gives: Dame Martha Ellen Kortright of 2 Grosvenor Crescent, widow, died 18 January 1907 at the Alexandra Hotel, Knightsbridge. With that we discovered from the Presbyterian Church in the USA  that “…Martha Kortright, a former resident of Philadelphia, who married a titled Englishman, and remembered the Church of her birth and native land most generously in her will.” which tells us that she was born in the USA.

Here are the details that Andrew found: Probate records on ancestry.co.uk show that 'On the 8th August 1888 the will of Sir Charles Edward Keith Kortright, formally Her Britannic Majesty's Consul at Philadelphia in the United States of America but late of 2 Grosvenor Crescent in the county of Middlesex, Knight, who died on 19 May 1888 at 2 Grosvenor Crecent was proved at the Principle Registry by Dame Martha Ellen Kortright of 2 Grosvenor Crescent, Widow the Relict the sole executrix. Effects £49,895-6s-9d. It also shows another entry as follows: Dame Martha Ellen Kortright of 2 Grosvenor Crescent, widow, who died 18 January 1907 at the 'Alexandra' hotel, Middlesex. Probate London 26 April 1907 to the Reverend John Storrs, clerk, and Percy Leigh Pemberton, esquire. Effects £49,784-10s-1d. Electoral registers show that Charles Edward Kortright was a registered voter at 2 Grosvenor Crecent from 1884 until his death in 1888.

We are led to the other candidate, Mary Kortright (d.1922), via Lost Hospitals whose source is The Hospital, 16 February 1895: "Lady Kortright, of Roden House, Brentwood, has sent the munificent gift of £7,000 to the treasurer of the Grosvenor Houspital for Women and Children. This is in addition to a sum of £1,000 already contributed by Lady Kortright. Both sums are in aid of the building fund."

On a link, now dead, we found a reference to a lunch given in the garden of Roden House, Brentwood, for the Society of Old Brentwoods. The lunch was connected with the cricketer, Charles Kortright (1871-1952) who attended that school. So, looking for a female Kortright of an age in 1895/6 to be making generous donations, Charles mother looks likely.

Andrew’s research gives: the cricketer was Charles Jesse Kortright. Probate records for him reads 'Charles Jesse Kortright of Earley Wood, Hillside Walk,Brook-street Hill, Brentwood, Essex, died 11 December 1952. Probate to Caroline Kortright, spinster. Effects £4,985-0s-7d'. The 1939 England and Wales Register show him listed as Charles J Kortright of Earleywood, Hillside Walk, Brentwood, born 9 January 1871, single, a retired brewer. Also at this address was a Caroline Kortright born 10 December 1874, single, unpaid domestic duties. The 1911 census shows both these Kortright's living with their widowed mother Mary Kortright at The Tiles, Fryerning, Essex. The 1871 census shows him living at Furze Hall, Fryerning, Essex with both his parents Augustus and Mary Kortright. Augustus married Mary Jephson in 1864 and they had 7 children (from The Baronetage and Knightage).

When Augustus Kortright died at Furze Hall, Blackmore Road, Ingatestone on 18 March 1897 his effects totalled £31,923-18-11d. When his wife Mary died on 11 June 1922 at The Tiles, Ingatestone, her estate totalled just £827-0s-8d, so the family funds had decreased drastically over 25 years. They had four sons and three daughters, so these children may have been a drain on her resources or maybe Augustus left his money to his children rather than his wife. Interesting that ‘Lady Kortright’ laid the stone in 1896, the year before Mary’s husband died.

So who was the generous Lady Kortright? Points in favour of Martha: we know she was entitled to ‘Lady’; she was very wealthy; she was in the habit of making charitable donations to good causes. Points in favour of Mary: She was connected with Roden House, Brentwood, which, given the Lost Hospitals information, is essential. Martha or Mary, take your pick.

Our friends at Lost Hospitals have pointed out that Lady and Sir Charles Kortright are connected with Fryering Church, 6 miles from Brentwood. They sent a link to the book “Ingatestone and the Essex Great Road with Fryerning" by By E. E. Wilde which has, referring to the church, “The lower part of the window was presented … by Lady Kortright, in remembrance of her husband. Sir Charles Kortright.” But we cannot connect these two Kortrights with Roden House.

This section lists the memorials created by the subject on this page:
Lady Kortright

Politician and patron. His date of birth is approximate. Member of Parliament...