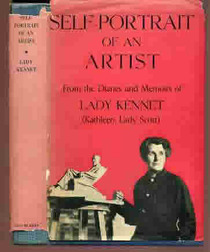 Married Captain Scott (of the Antarctic) in 1908 and was given the title Lady which she would have received, had he returned alive. Then married Sir Hilton Young in 1922, who became Baron Kennet thus providing her with yet another name, Lady Kennet. (We only comment on the name thing because it makes the research job so difficult.) Lived from 1927 at Leinster Corner, Lancaster Gate. The couple were friends of J. M. Barrie. Mother of the painter, ornithologist, and broadcaster, Sir Peter Scott, who was named after Peter Pan. Died St Mary's Hospital, Paddington.

"Self-Portrait of an Artist : From the Diaries and Memoirs of Lady Kennet" was published in 1949. The letters between her and Robert Scott are very touching.

Her war memorial in Huntingdon centre was listed Grade II in April 2014.

This section lists the memorials created by the subject on this page:
Lady Kathleen Scott

Sculpted by Kathleen Scott, his widow. There is a replica, in Christchurch, N...