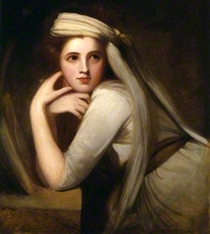 Sculptor. The picture on the right is his work 'A Polo Player'.

The Hampton Wick Remembers website gives much information about this soldier....