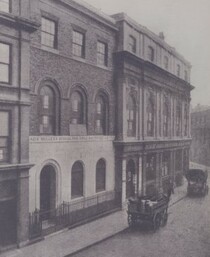 Founded near what is now the Barbican. One of the oldest girls' schools in the country, this was established when a trust for its endowment as a Christian foundation was created under the will of Lady Eleanor Holles (d. 1711), daughter of the second Earl of Clare. The school moved into purpose-built premises in Redcross Street in 1832.  These were expanded but were still just an elementary school. In 1878, the middle school opened in a new building built for 264 pupils between the ages of 8 and 16 at 182 Mare Street in Hackney. Now (2013) that building is used by the London College of Fashion.) and then, in the 1930s, to Hampton. The Redcross elementary school was closed in 1899 and a new fire station was built on the site.

A London Inheritance places the location of the Redcross school in the middle of the stretch of water to the west of the Barbican plaque.

Our Picture source has valuable information about the history of the school and this photo captioned: "Lady Eleanor Holles School in Redcross Street, 1864 - 1899"

This section lists the memorials where the subject on this page is commemorated:
Lady Eleanor Holles School

This plaque is placed here by the governors and friends of the Lady Eleanor H...

Born Caroline Anne, daughter of Richard Martineau, a director and partner of ...

Founded by Margaret Walker after she worked with Joan Littlewood at the Theat...