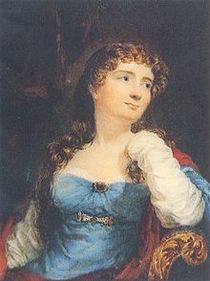 Born as Anne Isabella Milbanke, sometimes known as Annabella, an heiress in her own right. Unusually well-educated. An unwise marriage to Lord Byron in January 1815 lasted only a year but did produce Ada Lovelace. They lived at 13 Piccadilly Terrace, which is where Ada was born and the house where Lady B left Lord B. She became convinced her husband was mad though it was she who was obsessed by him for the rest of her life. She educated Ada in science as a protection against any inherited madness.

Lived in Ealing from at least 1822 - 40, at Fordhook House and at Hanger Hill House.

Established the Ealing Grove School (for boys) in 1833 on the site where the plaque is. 'Lady Byron and Her Daughters' By Julia Markus explains that this was a co-operative school based on a Swiss model. Also active in; the anti-slavery campaign.

Our information comes from Ealing News Extra and other sources.

From British History Online we learn that the Byrons' short-lived home in Piccadilly had (by 1878 when Walford published Old and New London Vol. 4) been renumbered as 139 Piccadilly. It's still there; the flat-fronted house on the section between Old Park Lane and Hamilton Place. Prior to the Byrons' time, it and the house to the east used to be one house (you can see this from the similarity in the decorations of their front elevations) belonging to Lord Queensberry (as shown on this 1805 map).

This section lists the memorials where the subject on this page is commemorated:
Lady Byron

The school was originally founded in 1695, although its first location is unk...

It has its origins in five previously independent colleges, which were brough...