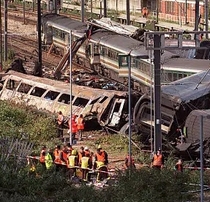 Also referred to as the Paddington rail crash. At 8.06am, a Thames train bound for Bedwyn in Wiltshire left Paddington station. Two minutes later, as it sped along at 41mph, it went through a signal with the driver failing to see that it was on red. At the same time, a First Great Western train from Cheltenham was heading towards Paddington at nearly100mph. Spotting the imminent crash, the control centre in Slough switched a signal to red, but the high speed train passed through it. Both drivers applied their brakes too late, At 8.10am, the trains collided at a combined speed of 135 mph; the Thames train was sliced in half and both engines burst into flames. 29 passengers and the two drivers were killed, and more than 500 were injured.

The Cullen Report of 2001 blamed Railtrack for the signalling failures, and the company was eventually fined £2 million, which was paid out of taxpayers' money.

This section lists the memorials where the subject on this page is commemorated:
Ladbroke Grove rail disaster / Paddington rail crash

In the middle of the morning rush hour four bombs went off on three tube trai...