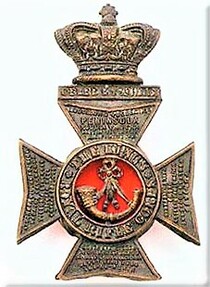 Our picture source and their Wikipedia page gives details about the origins of the regiment in 1756, the changes in its name - formally becoming the King's Royal Rifle Corps in 1830 - and its battle honours.

This section lists the memorials where the subject on this page is commemorated:
King's Royal Rifle Corps