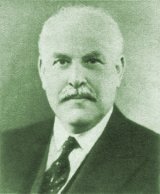 Josiah Charles Stamp, 1st Baron Stamp, was an English industrialist, economist, civil servant, statistician, writer, and banker. Born Hampstead/Kilburn (depending on source). 1926 he became the first President of the London, Midland and Scottish Railway, and a director of the Bank of England in 1928. Brother to geographer L. Dudley Stamp.

Stamp, his wife and their eldest son, Wilfred, were killed when the air raid shelter at their home, 'Tantallon' in Park Hill Road, Shortlands, received a direct hit on the night of 16 April 1941.  Wikipedia adds a fascinating detail: "Stamp's son Wilfred was killed at the same time and in the same place as his father, but English law has a legal fiction that in the event of the order of deaths being indeterminable, the elder is deemed to have died first. Legally therefore, Wilfred momentarily inherited the peerage: and as a consequence the family had to pay death duty twice."

This section lists the memorials where the subject on this page is commemorated:
Josiah Charles Stamp

Secretary at the Royal Free Hospital in 1895.