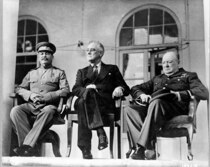 Joseph Vissarionovich Stalin was a Georgian revolutionary and the ruler of the Soviet Union 1927-53. He served as both General Secretary of the Communist Party of the Soviet Union (1922–52) and Chairman of the Council of Ministers of the Soviet Union (1941–53). Despite initially governing the country as part of a collective leadership, he ultimately consolidated power to become the Soviet Union's de facto dictator by the 1930s. A communist ideologically committed to the Leninist interpretation of Marxism, Stalin formalised these ideas as Marxism–Leninism while his own policies are known as Stalinism.

Considered both a great politician and also a mass murderer. Our 1943 photo (left to right: Stalin, Roosevelt, Churchill) shows that at one time the west was very good friends with Stalin.

This section lists the memorials where the subject on this page is commemorated:
Joseph Stalin

Politician. Born Betty Boothroyd in Dewsbury, Yorkshire. In the 1940s she was...