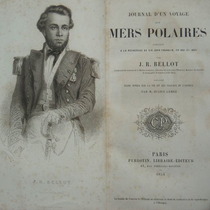 Explorer. Born Paris.  For his participation in the 1845 Anglo-French expedition to Madagascar Bellot received the Legion of Honour.  1851 he joined Captain Kennedy's expedition to find the Franklin expedition, during which he discovered the strait named for him. 1852, now a lieutenant, he joined Captain Inglefield's Franklin expedition but he died falling under the ice in Wellington Channel. Having died so young (27) on a brave mission he was widely mourned and commemorated: an obelisk in Greenwich, Bellot Street SE10 and in 1935 - the Bellot crater on the moon.

The picture is the frontispiece opening from his journal published in 1854: "Journal D'un Voyage Mers Polaires".

This section lists the memorials where the subject on this page is commemorated:
Joseph René Bellot

Formed to establish British settlements in New Zealand. 5 May 1839 despatche...