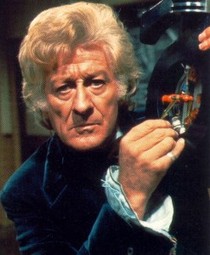 Actor. Born 3 Sheffield Terrace, Kensington. Having served in the Royal Navy and the Naval Intelligence Division during WW2 he became widely known during his 18 years (1959–77) playing Chief Petty Officer Pertwee (and three other roles) in the popular sitcom The Navy Lark on BBC Radio. Played the third Doctor Who, 1970-4. Also known for 'Worzel Gummidge'. Father of actor Sean Pertwee. Died in his sleep while on holiday in Connecticut, USA.

This section lists the memorials where the subject on this page is commemorated:
Jon Pertwee