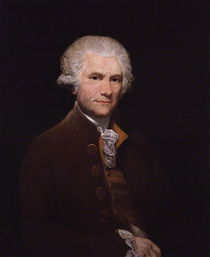 Born Newport Street, Westminster. Lived a full life the low point of which was probably being held in the Tower of London for high treason, but he was quickly acquitted. Died at home in Chester Lodge on the west side of Wimbledon Common. But was he buried in Bunhill burial ground?

A number of reputable sources claim he was buried in Ealing, including Find a Grave, so we are puzzled. If there was another John Horne Tooke we can't find anything about him, and Find A Grave do not have a JHT buried at Bunhill. And the Ealing JHT did have lots of connections with the nonconformists. Looks to us like there might be a mistake carved into the stone pier on City Road.

Stephen Brasher took this as a challenge and writes to say that Hansard of 1867 reckons Tooke was buried at Bunhill but of course, he writes, even Hansard can repeat mistakes! Stephen will keep looking for more substantial evidence.

This section lists the memorials where the subject on this page is commemorated:
John Horne Tooke

FREng. Chairman of the Castle Baynard Ward Club in 2009.