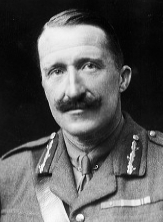 Soldier. Born John Vaughan Campbell. In 1916 he was a temporary lieutenant colonel commanding the 3rd Battalion, Coldstream Guards. On 15th September at Ginchy, France, during the Battle of the Somme, he took command when the first two lines of his battalion had been decimated by gunfire. He and his men captured the enemy's machine guns and he later led them through heavy fire. For his actions, he was awarded the Victoria Cross.
He was called the 'Tally-Ho VC', because he rallied his men by blowing a hunting horn and giving the traditional cry.

This section lists the memorials where the subject on this page is commemorated:
John Campbell VC

{Below an image of a Victoria Cross medal:} Lieutenant Colonel John Campbell,...