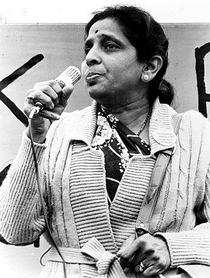 Trade Unionist and teacher. Born as Jayaben Suryakant Patel in Dharmaj, Gujarat, India. She moved with her husband to Tanganyika (now Tanzania), but was forced to leave for Britain following the country's independence and the introduction of its policy of 'Africanisation'. She found employment at the Grunwick film processing plant, but refused to accept the treatment meted out to low-paid migrant workers, particularly the managerial control and compulsory overtime at short notice. She led a walkout which was the start of the Grunwick workers strike. She went on to teach at the Brent Indian Association. Died at the Middlesex Manor Nursing Centre, Wembley.

This section lists the memorials where the subject on this page is commemorated:
Jayaben Desai

Mayoralty of the City of London - 800th anniversary

The Mayor, poor lamb, has to make 700 speeches during his year in office.

Poet, and diplomat. Born in Csongrád, Hungary. His family moved to Romania in...