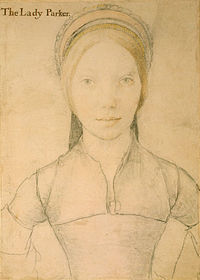 Born Jane Parker, a distant relative of Henry VIII, she became a lady-in-waiting to his first wife, Catherine of Aragon, and to quite a few of those that followed.  Married Anne Boleyn’s brother, George, and later, when Anne was an unwanted wife and George and Anne were accused of incest, Jane gave evidence against her husband. Consequently George was beheaded on Tower Hill along with four other men also accused of adultery with Anne.  A few years later when Henry needed to get rid of another wife, Anne of Cleves, Jane again provided useful evidence.  When Catherine Howard (number 5) needed a go-between to facilitate her liaisons with Thomas Culpeper Jane stepped into the role.  But the affair was discovered and all involved and some that weren't, were imprisoned.  Jane appeared to suffer a nervous breakdown and was declared insane which ought to have saved her life but Henry changed the law to allow the execution of the insane and so Jane was beheaded at Tower Green, immediately after Catherine.

This section lists the memorials where the subject on this page is commemorated:
Jane Boleyn, Viscountess Rochford

Closely related to the royal family but Henry VIII took against Henry and his...