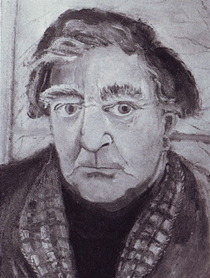 Novelist and playwright. The ODNB says he was born Dublin 1901. Wikipedia says that's wrong; it was Liverpool in 1897. Left school aged 12 and educated himself thereafter. In WW1 he served in the merchant navy and then the army. His second novel, Boy, 1932 was successfully prosecuted for obscenity and supressed until 1990. His novels about the Fury family in Liverpool are semi-autobiographical. Lived in Wales 1930-63 and set some novels there. The BBC have produced some of his work on radio and television. Died at home, where the plaque is.

The portrait was painted by his son, Liam.

This section lists the memorials where the subject on this page is commemorated:
James Hanley

Businessman and author. Born in Trieste (then part of Austria-Hungary) as Aro...