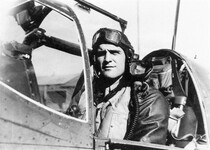 His brother, Thomas Hitchcock Clark, who was born on 15 July 1922 would later serve as a Flight Sergeant in the Royal Air Force's No.132 Squadron and was killed in action on 15 March 1944 in France.

Our Picture source outlines his career and confirms that he joined the Royal Air Force Volunteer Reserve on 19 December 1941 and initially served as a Pilot Officer in the Royal Air Force's No.71 (Eagle) Squadron. The citations for his awards of the Silver Star, the Distinguished Flying Cross with 4 Bronze and 1 Silver Oak Leaf Clusters, can be found on The Hall of Valor website.

His obituary in the New York Times confirmed that he was survived by his wife, Armene; a daughter, Carey, of Manhattan; a son Christopher, of Norfolk, England, and two grandchildren.

This section lists the memorials where the subject on this page is commemorated:
James Averell Clark

Colonel Oscar Hoffman Coen was born on 11 May 1917 in Walum, Hannaford, Grigg...