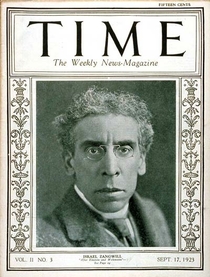 Writer and philanthropist. Born in Ebenezer Square, Whitechapel. He became deeply involved with the Zionist cause, and travelled widely; speaking and writing on its behalf. His works earned him the nickname 'The Dickens of the Ghetto'. His play 'The Melting Pot' was hugely popular in the United States and its title became synonymous in describing  the American absorption of immigrants. Died at the Oakhurst Nursing Home in Midhurst, Sussex.

This section lists the memorials where the subject on this page is commemorated:
Israel Zangwill

Book written by Helene Hanff in 1970 concerning the 20-year correspondence be...