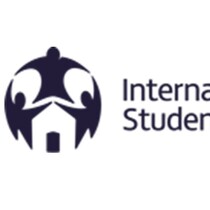 ISH began life in 1917 as Student Movement House, a social centre opened at 32 Russell Square in memory of students who died in WW1. 1932 - 46 the warden of Student Movement House was Mary Trevelyan (1897 - 1983). She left to travel and understand better how she could help international students. It's not clear when SMH became ISH but May 1962 Trevelyan was instrumental in the creation of the charity, the International Students Trust and in 1965 their Patron, the Queen Mother opened the newly built accommodation in Great Portland Street.

A number of buildings in the Regent's Park area of London make up 'ish' as this organisation is apparently known, to those that know.

We keep seeing this logo as a startled monkey face, rather than 3 people holding hands. Must get our eyes checked.

This section lists the memorials where the subject on this page is commemorated:
International Students House

A local conservation and amenity group founded in 1985 (following a campaign ...