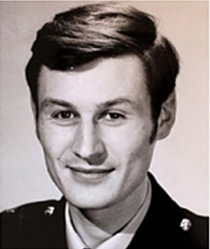 Andrew Behan has researched this man: Inspector Stephen John Dodd was born on 11 September 1949, the son of John Irving Dodd and Irene L. Dodd née Dowie. His birth was registered in Ealing. In 1970 he married Maureen McMahon in Cuckfield, Sussex and they had a son and two daughters, Melanie and Susanne. They lived at 64 Beechwood Court, West Street Lane, Carshalton, Surrey. He joined the Metropolitan Police Force (now the Metropolitan Police Service) and was a sergeant at Epsom police station.

Promoted to Inspector he was attached to Chelsea police station and on 17 December 1983, whilst investigating a reported terrorist car bomb and evacuating the area outside Harrods store in Hans Crescent, Knightsbridge, the device exploded and he was mortally injured, dying on 23 December 1983, aged 34 years. Probate was granted and his estate totalled £51,250.

This section lists the memorials where the subject on this page is commemorated:
Inspector Stephen Dodd

Unit of soldiers raised in Manchester during the 1745 Jacobite Rebellion, sup...