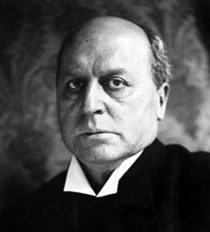 Writer. Born at 21 Washington Place, New York City. Initially he studied to be a lawyer, but gave it up in favour of writing literary reviews and short stories. His better-known works include 'Washington Square', 'Portrait of a Lady' and 'The Turn of the Screw'. The latter has been filmed many times and adapted as an opera by Benjamin Britten. He moved to England in 1876, becoming a British citizen in 1915. Surprisingly he and Robert Louse Stevenson admired each others work and exchanged support and criticisms. Died at his home, 21 Carlyle Mansions, Cheyne Walk, Chelsea. He had been ill for 3 months, during which he sometimes imagined that he was Napoleon.

In 1990 a theory was proposed that James's particular writing style came from his efforts, as a gay man, to remain in the closet, and even that that was his real, hidden, subject.

This section lists the memorials where the subject on this page is commemorated:
Henry James