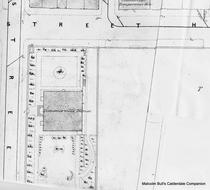 Andrew Behan has researched this lady and discovered the following:

Born about 1837 as Marian Prescott in Manchester, the daughter of Cyril and Marian Prescott. Her father was a solicitor. 12 September 1867, aged 30 and a spinster, she married Francis Leigh, aged 62, a bachelor and Clerk in Holy Orders, at St John the Baptist Parish Church, Halifax. Her home address at the time was shown as 'Summerville', Halifax.

On the night of the 1871 census it shows the couple staying in the Oatlands Park Hotel, Weybridge, Surrey. The 1881 census shows them living at 'Ashenhurst' Sydenham Rise, Camberwell, with a cook and a housemaid. His occupation is given as a 76 year old clergyman without the care of souls. The 1891 census records Mrs Leigh as widowed, living on her own means, at 'Summerville', Union Street, Halifax, with a cook and a housemaid.

We have found no picture of Mrs Leigh so we show a plan of her home, Summerville House in 1870, instead. The Picture source has some images but it's not totally obvious which house is Summerville. It would appear to have been a substantial property, which sadly no longer exists.

Andrew also found this link, MDFCTA, which shows a quite ornate trough/drinking fountain in Halifax, presented by Mrs Leigh of Summerville in memory of her mother Mrs Prescott. But we don't know of any connection to London that would explain the trough in City Road.

This section lists the memorials where the subject on this page is commemorated:
Marian Leigh