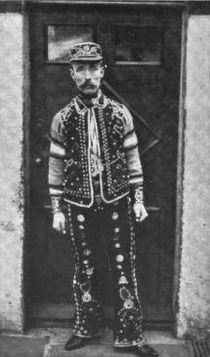 The original Pearly King. Born in the St Pancras Workhouse (now, 2015, the St Pancras Hospital, immediately north of St Pancras Gardens). His mother was in and out of the workhouse, sometimes giving an address and sometimes not. His father was a musician but may have left, or died, since Henry was brought up in an orphanage - where he learnt to sew.

For his whole working life, from about the age of 15, he was employed by the local council as a road-sweeper - see the statue Street Orderly Boy for information on this job. 1892 married Lily Newton and went on to have 12 children. The picture originates in the Strand Magazine of February 1902 and is captioned ‘the Pearlie King of Somers Town’ – which seems right - all of the addresses given for him are in or near to the Somers Town area.

He did not invent the use of pearl buttons for decoration but certainly took it to new heights. It became so popular that in 1911 The Original Pearly Kings' and Queens' Association was formed. Croft created all his suits himself and made them for other people as well.

Twice presented to royalty he collected for various charities including his own orphanage and the 1928 flood. Died in the same workhouse where he was born. He was buried in St Pancras Cemetery on 7 January and his very long funeral cortege attracted the attention of British Pathe. His coffin was carried from his home in Phoenix Street, near Euston Road out to the cemetery, almost 6 miles away, so we do wonder if the whole procession went the whole way.

Most of this information, and the picture, comes from the extremely informative Studied Monuments - well worth a visit.

This section lists the memorials where the subject on this page is commemorated:
Henry Croft