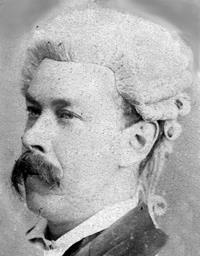 Born Hackney, youngest son of Frederick Richards. Barrister, Queen's Counsel from 1898, Treasurer of Gray's Inn 1904 - 1905. MP for East Finsbury 1895 - 1905. Educated at the City of London School and College. For over twelve years with a large City firm (Munt Brown and Co.) and Bacon Scholar Gray's Inn, 1879. Made Barrister in 1881 and Queen's Counsel in 1898. Bencher Gray's Inn. Was counsel to Postmaster-General at Central Criminal Court, 1887. Chairman City Branch Church Defence Institution, 1887. Formed the City Church and Churchyard Preservation Society, 1880. Elected member of Council London Chamber of Commerce, 1902. Chosen Conservative candidate for Northampton against Mr. Bradlaugh (founder of the National Secular Society), and stood for the borough three times (1884, 1885, 1892). Member of Parliament for East Finsbury 1895 - 1905. Engaged in the Tower Bridge case and for and against the London School Board and L.C.C. Argued the Incense case before the two Primates at Lambeth. He was very keen on army reform and middle class representation in the Cabinet and believed in an altered Tariff for old age pensions but not in favour of taxing food stuffs.

He also provided much support and sponsorship for improvements at St Peter's Church at Newlyn, Cornwall in memory of his brother. Spent the happiest hours of a busy life as a frequent worshipper within the walls of St Paul's Cathedral. An amateur archaeologist, in his will he left money for the re-erection of Paul's Cross at St Paul's. Fellow of the Royal Horticultural Society; Fellow Society of Antiquarians; Middlesex Archaeological Society; St Paul's Ecclesiological Society.

Amongst his achievements the plaque lists "baker and turner". We take this to mean that he was a member of both the Bakers and the Turners City companies.

This section lists the memorials where the subject on this page is commemorated:
Henry Charles Richards