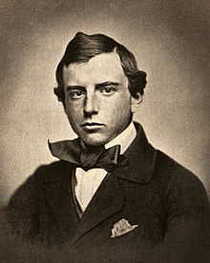 Apart from the fact that he won a Pulitzer for "Education of Henry Adams," 1919, all that the web can supply for him is quotations. You might have better luck.

We published this plaque in 2009 and our colleague, Andrew Behan, took up the challenge.

Henry Brooks Adams was born on 16 February 1838 in Boston, Massachusetts, USA. His paternal great grandfather was John Adams the 2nd President of the United States of America and his grand father was John Quincy Adams the 6th President.

On 19 March 1861, President Abraham Lincoln appointed his father, Charles Francis Adams (1806-1886), as the US Ambassador to the United Kingdom, and he accompanied his father in his private secretary role, returning to the USA in 1868.

He died, aged 80 years, on 27 March 1918 in Washington, District of Columbia, USA and is buried in Rock Creek Cemetery, 201 Allison Street NW, Washington, DC 20011, USA. Our picture source now gives a biography of his life.

This section lists the memorials where the subject on this page is commemorated:
Henry Brooks Adams

The One Tun pub in Perkins Rents was in the infamous area known as the Devil'...