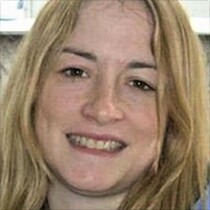 28-year-old chartered accountant, died as she travelled to work on the Piccadilly line, the only Scot killed in the 7 July bombings. Read about the Memorial Scholarship set up in her name. Our colleague, Andrew Behan, has researched this lady.

Helen Katherine Jones was born on 13 February 1977 in Edinburgh, Scotland, the daughter of Elizabeth Jones née Staffell. She grew up in Templand near Lockerbie in Dumfriesshire, Scotland. She moved to London in November 2001 and worked as an accountant for Phoenix Equity Partners. She lived in Holloway, north London, where she had bought a flat only two weeks before she died. Her obituary can be found on the BBC News website.

She died, aged 28 years, on 7 July 2005 when travelling in the underground tunnel of the Piccadilly Line on the London Underground Railway between King's Cross and Russell Square underground stations that was targeted by a suicide bomber. The narrative verdict of her death can be found on the Coroner's Inquest Report.

This section lists the memorials where the subject on this page is commemorated:
Helen Katherine Jones

Auxiliary Fireman - one of two men (with L. W. G. Wilson) who gave their live...