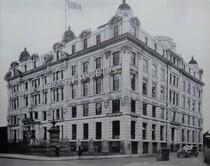 National Archives gives: "It was on 20th June 1842 that twelve members of a Provident Society met at the Bird-in-Hand Tavern, 17 Long Acre, with the intention of establishing their own Society. This society was to be named the Hearts of Oak Benefit Society, after the navy whose wooden ships protected Britain from invasion. The intention of the Society was to protect its members against distress through sickness. A Committee of Management was established under the founder and Secretary Mr John Hadley. The landlord of the Bird-in-Hand Mr Richard Mills was elected first Treasurer of the Society.

By the 1850's following the passing of the Friendly Societies Act the Society's membership and range of activities expanded rapidly. In 1863 new larger premises were acquired in Greek Street, Soho, where the Society operated until 1875 when it moved to Charlotte Street. By 1877 the number of members had grown too large to make an Annual General Meeting practicable and a Board of Delegates was therefore established. To celebrate the Society's fiftieth anniversary members purchased a lifeboat bearing the name Hearts of Oak which was launched at Lowestoft in 1893. By 1906 when King Edward VII opened the new Euston Road offices the Society had around half a million members. The offices were further expanded into Grafton Place in 1916. From 1910 the Society was ready to expand its sickness, maternity and death benefit schemes and to seek new areas of activity. A Juvenile Branch was registered for boys and young men between the ages of one and nineteen. Following the 1911 Health Insurance Act, the Society was among the first of the Friendly Societies to govern State Insurance Business and to admit women members.

In 1938 the Society opened a new Convalescent Home at Broadstairs, Kent. During World War Two the Society's headquarters were evacuated to Herstmonceux Castle, Sussex. In 1942 as part of the Society's Centenary celebrations and to assist the war effort the Society presented twelve fully equipped ambulances to Civil Defence Authorities around the country. These vehicles were inspectd by King George VI and Queen Elizabeth in the courtyard of Buckingham Palace on 19 May 1942. The Society's Euston Road offices were rebuilt between 1968 and 1970, with the new block being opened by Her Majesty Queen Elizabeth The Queen Mother on 16 April 1970. In 1997 the Society's registered office moved to Leicester where the computer base had operated since 1973.

Following the publication of the Beveridge Report on Social Security in 1948 the Society severed its connections with National Insurance and its members had to join the State Insurance Scheme. From that date the Society has concentrated solely on voluntary insurance. ...."

This eBay item includes an architect's drawing of the building with some floor plans.

In 2007 Reliance Mutual took over Hearts of Oak.

This section lists the memorials where the subject on this page is commemorated:
Hearts of Oak Benefit Society

This section lists the memorials created by the subject on this page:
Hearts of Oak Benefit Society

We are delighted that the Terraces Tenements and Tower Blocks project researc...