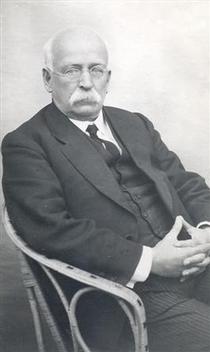 Founder of the garden city movement. Born 62 Fore Street. Travelled to America in 1871 where he tried farming and was in Chicago at the time that it was being rebuilt after a great fire. The new suburbs were given many parks and were known as a 'garden city'. Returned to London in 1876 and worked for Hansard as a shorthand writer (which he had taught himself) and dabbled in the redesign of the typewriter. He read widely and developed an interest in social issues and how the design of cities was a factor. He published 'Garden Cities of To-morrow' in 1898, describing a utopian city where people lived harmoniously together with nature. 1899 he created the Garden Cities Association, the oldest environmental charity in England. His campaigning resulted in Letchworth Garden City (begun in 1904) and Welwyn Garden City (1919). Howard's influence was worldwide. Unsurprisingly he was a supporter of Esperanto and often used it in his speeches. Died at home in Welwyn Garden City.

This section lists the memorials where the subject on this page is commemorated:
Sir Ebenezer Howard

Architect active in the 1960s.