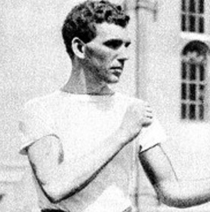 Boxer and policeman. Born Henry William Mallin in Hackney. Although primarily a policeman, he took part in the 1920 Olympics in Antwerp, winning gold. He also participated in the 1924 Olympics in Paris, and became involved in a controversial boxing match. At the end of the fight, he showed the referee a number of bite marks on his chest. This was ignored and his opponent was declared the winner. Subsequently a member of an international boxing association protested, and the decision was reversed in Mallin's favour, causing a near riot.
He managed the Britsh Olympic boxing teams at the 1936 and 1952 Summer Olympics, and became the first British television sports commentator.

This section lists the memorials where the subject on this page is commemorated:
Harry Mallin