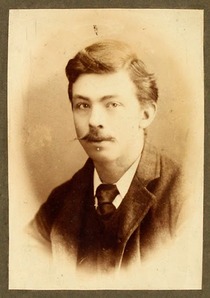 Textile designer. Born Islington, son of Arthur Silver. In 1908 he married Josephine Muriel Abbott in Brighton, Sussex and in April 1911 they were living with his wife's widowed sister, Beatrice Ida Romfrey, at 'Blatchcombe', Wonersh, Guildford, Surrey. 1900-1916 Harry was the chief designer at Silver Studio. In 1914 he was living at 47 Castleton Mansions, Haarlem Road, Hammersmith and In 1918 they were residing at 'Wylde Close Corner', Hampstead Way, Hampstead. In 1935 they were living at 131 North End House, North End Road, W14. By 1938 they had moved to 147 Chatsworth Court, Earls Court.

We are grateful to Andrew Behan for researching the three Silvers for us.

2019: Andrew added some more information: Burnham and his wife had two daughters, Erica Joan Abbott Silver (born 5 July 1911 in Richmond and died 6 February 2005 in Oxfordshire) and Gabriel Abbott Silver (born 5 May 1914 in Hendon and died 20 February 2010 in Virginia Water, Surrey) together with a son, Lancelot Edwin Abbott Silver (whose birth was registered in the 3rd quarter of 1922 in Hendon and who died on 4 October 1944 at the Stonycrest Nursing Home, Hindhead, Surrey). The 1939 England and Wales Register shows him and his wife living at 'Foresters', Gilhams Lane, Linchmere, Haslemere, Surrey. He died on 2 May 1971, his home address being 1 The Ridge, Ridgemount Road, Sunningdale, Berkshire and probate records show he left an estate totalling £26,739.

This section lists the memorials where the subject on this page is commemorated:
Harry Burnham Silver

Artist and designer of the peace symbol in 1958. Graduated from the Royal Co...