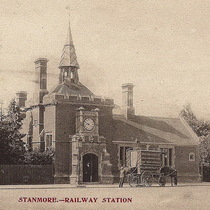 Our image shows the station building at Stanmore, renamed Stanmore Village. Dewi Williams has more photos of the building, in 1949.

In 1882, nearby Bentley Priory, a stately home and deer park, was bought by Frederick Gordon, a wealthy hotelier, who converted it into a luxury hotel. But the nearest railway station, Harrow and Wealdstone, was about 4 miles away so Gordon built a branch line (haven't we all done that?), the Harrow & Stanmore Railway, from there to Stanmore. This still left guests with about 2 miles to cover on foot, or more likely by carriage. This page has a map showing the relative distances.

The station opened on 18 December 1890. The trains were run by London & North Western Railway first and later by the London, Midland and Scottish Railway.

A second station at Belmont was opened on 12 September 1932 - we think the station was on the north side of Kenton Road, between the Belmont Health Centre and Parnell Way, but no one seems to have thought to erect a plaque there.

Stanmore Station was left to ruin and in 1969 most of it was demolished and a house constructed from what was left.

The Wikipedia page is helpful.

This section lists the memorials where the subject on this page is commemorated:
Harrow & Stanmore Railway