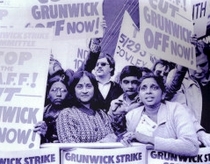 Grunwick was a photographic film processing firm. 90% of its employees were either of Asian or Afro-Caribbean origin and working conditions were oppressive. Following the sacking of an employee for 'working too slowly' several others led by Jayaben Desai walked out. The dispute attracted much media attention and mass-picketting from unions around the country, with violence breaking out on a number of occasions. Eventually the Trades Union Council withdrew its support and the strike collapsed. The repercussions however, were far-reaching, significantly weakening the influence of the trades union movement.

This section lists the memorials where the subject on this page is commemorated:
Grunwick workers strike

Co-founder and funder (with Sir Julius Wernher) of the Royal School of Mines ...