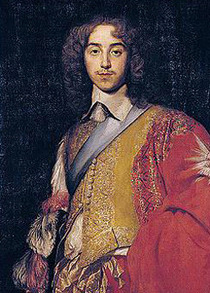 Statesman and poet. Born at the family home Wallingford House (where the Old Admirality Building now is). A baby when his father, the 1st Duke, was assassinated, he was brought up alongside Charles I's own children, the future kings Charles II and James II. Not surprisingly he was a Royalist in the Civil War, and, via Scotland, went into exile with Charles II. At the Restoration he joined the court and was influential in government until 1674 when his Catholic sympathies caused his downfall.

His personal life was lively, involving lovers, scandals and duels. He could be a witty poet; two examples:

"The world's a wood, in which all lose their way,
Though by a different path each goes astray."

"Methinks, I see the wanton hours flee,
And as they pass, turn back and laugh at me."

He returned to public life briefly when James II came to the throne. Retired to his Yorkshire estates where he died.

This section lists the memorials where the subject on this page is commemorated:
George Villiers, 2nd Duke of Buckingham

Duke of Buckingham, George Villiers "of"

Site of the Duke of Buckingham's house 1672. The Corporation of the City of L...