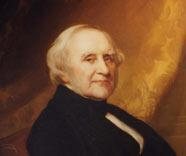 His philanthropy in America was focussed on education and in Britain on housing. The Peabody Donation Fund was created and the first Peabody model housing block opened in Spitalfields in 1864, followed soon by buildings in Chelsea, Bermondsey, Islington, and Shadwell. The Fund, now 'Peabody', continues to provide housing.

Tobacco manufacturer and philanthropist. Born in what is now Belarus. His fat...