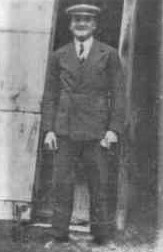 The 1881 census shows him living at 121 St Johns Road, Shoreditch, with his parents and elder brother.

On 12 May 1882 he, together with his elder and a younger brother, were baptised at St Saviour's Church, Hoxton. The baptismal register records his father as a barman and that the family were living at 37 Gopsall Street, Hoxton.

He was reported to be a cloth shamferer's porter on the 1901 census, living at 19 Nicholas Street, Hoxton, with his parents and five of his siblings.

He claimed to be a cab washer when on 14 July 1916 he enlisted as a Private in the 2nd/9th Battalion, Durham Light Infantry and served in England from 15 July 1916 to 5 November 1916. From 16 November 1916 he was transferred to the Mediterranean Expeditionary Force and saw service in Salonika (now Thessaloniki, Greece). His service number was initially 5770 but later renumbered to 326210. He returned to England on 21 January 1919 and was discharged on 13 April 1919 to live at 58 Baldwin Street, London, EC1. He was awarded the British War Medal 1914-1918 and the Victory Medal.

The 1939 England and Wales Register confirms he was still living at 58 Baldwin Street with his wife and two of his sons, Charles and Thomas.

Administration of his estate was granted to his widow on 12 February 1945 and probate records show his effects totalled £322.

He is also commemorated on the Civilian War Dead Roll of Honour located near St George's Chapel, Westminster Abbey.

This section lists the memorials where the subject on this page is commemorated:
George Dudley

Andrew Behan has kindly carried out some research on this man:  Second Lieut...