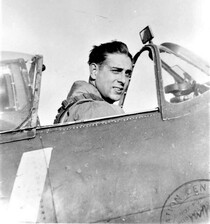 Our Picture source gives details of his military service including how he joined the Royal Canadian Air Force where he served as a Flight Sergeant in No.121 (Eagle) Squadron, transferred to the USAAF, became a prisoner of war and retired with the rank of Major.

After marrying his English girlfriend, he returned to the USA where he attended Kirksville College of Osteopathy, Missouri, and graduated in 1956. He practiced medicine in Tennessee and died, aged 88 years, on 2 July 2007 in Paris, Henry County, Tennessee, USA.

This section lists the memorials where the subject on this page is commemorated:
George Carpenter