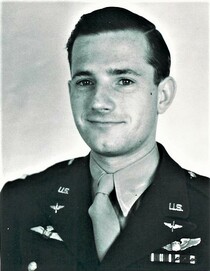 In 1940 he joined the Royal Air Force Volunteer Reserve in Canada and served as a Pilot Officer in No.133 Squadron based at RAF Biggin Hill. On 29 September 1942 he transferred to the 336th Fighter Squadron attached to the 4th Fighter Group in the Eighth Air Force of the USAAF and was initially based at RAF Debden, Essex. On 23 April 1943 he was promoted to the rank of First Lieutenant and on 4 May 1944 was designated as the Flight Commander of 'D' Flight. He was one of the squadron's strafing experts - attacking and destroying numerous trains, a bridge and an electrical plant. He flew over 210 combat missions, first in Supermarine Spitfires, then in Republic P-47 Thunderbolts and North American Aviation P-51 Mustangs.

On 25 May 1944 he was promoted to Captain and flew 3 missions as Flight Commander of 336 Squadron on D-Day. He was later transferred to the 408th Fighter Squadron attached to the 372nd Fighter Group in the Third Fighter Command based at Alexandria Esler Regional Airport, 7615 Esler Field Rd, Pineville, Louisiana, USA, from 6 November 1944 to May 1945. He was awarded the Air Medal, the Distinguished Flying Cross, the European-African-Middle Eastern Campaign Medal and the World War II Victory Medal.

On 11 November 1950 he married Virginia Holly (1928-2018) in Los Angeles, California, and they had two children, Richard and Elizabeth. He became the owner/operator of Smith, Braley Investment Company, a construction and finance firm.

He died, aged 84 years, on 24 January 2006 at Newport Beach, Orange County, California, USA and his obituary was published in the Los Angeles Times.

This section lists the memorials where the subject on this page is commemorated:
Richard Braley