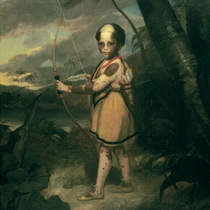 Born on the Caribbean island of St. Vincent in 1808 to slave parents. Born with vitiligo, also known as piebaldism he was, as a baby, put on show in the capital, Kingstown. Aged 15 months he was taken to Bristol and sold to the travelling showman, John Richardson who took him around England's fairs displaying him for entertainment. George died aged four years and nine months.

This section lists the memorials where the subject on this page is commemorated:
George Alexander Gratton

Training ships were run by the Marine Society, and catered for boys from a wi...