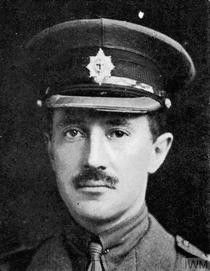 Killed in action in France, serving with the Coldstream Guards. Son of Sir Herbert Stewart.

Andrew Behan found the photo and has researched this man: Captain Geoffrey Stewart was born on 28 October 1878 in Binfield, Berkshire, the elder son of Major General Sir Herbert Stewart, K.C.B. and Georgina Janet Stewart, née Stirling, the widow of Major General Sir Henry Tombs, K.C.B. His father died in 1885 and the 1891 census shows him and his mother visiting the home of Richard Henry Combe at Pierrepoint House, Frensham, Surrey and lists him as a 12 years old Page to Her Majesty Queen Victoria. He was educated at Eton and was gazetted as a 2nd Lieutenant in the Coldstream Guards on 13 July 1898.

He was promoted to Lieutenant on 12 December 1899 whilst serving with the regiment in South Africa. He took part in the Second Boer War receiving the Queen's South Africa Medal with six clasps for the various actions in which he took part, i.e. Belmont, Modder River, Johannesburg, Diamond Hill, Belfast, and Orange Free State. He was also awarded the King's South Africa Medal with both the 1901 and 1902 clasps. He was employed with the Egyptian Army from 26 October 1905 until 25 October 1907 and whilst there was promoted to Captain on 3 February 1907.

He retired from the Coldstream Guards and joined the Reserve of Officers on 23 July 1910. He joined the Leicestershire Yeomanry (Territorial Force) as a Captain in 1911 and was promoted to Major on 18 February 1914. When the First World War broke out in August 1914 he was on the North Midland Mounted Brigade Staff but re-joined the 1st Battalion, Coldstream Guards in December 1914, arriving in France on 8 December 1914.

He was killed in action, aged 36 years, on 22 December 1914 whilst retiring from a lone reconnaissance made to enemy trenches at Givenchy-en-Gohelle, France. As he has no known grave he is commemorated on Panel 2, Stone 'D' a the Le Touret Memorial, at Le Touret Military Cemetery, 20 Rue du Bois, 62136 Richebough, France. His widow was sent his army effects totalling £73-0s-2d on 22 July 1915 and was granted probate of his estate which totalled £38,134-2s-6d. He was posthumously awarded the 1914-1915 Star, The British War Medal 1914-1918 and the Victory Medal and these were sent to his widow at The Cottage, Great Brington, Northamptonshire.

This section lists the memorials where the subject on this page is commemorated:
Geoffrey Stewart

The medallion was sculpted in 1886.  Chelsea says: "It appears to be based on...