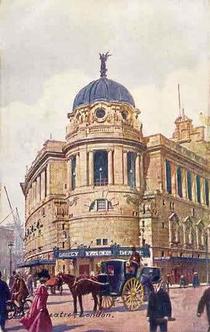 Before the Aldwych development in 1906 the street pattern was very different.  The site between the current Lyceum Theatre and the current corner, Silken Hotel, was occupied by the Lyceum Theatre, which moved in 1834 to its current site.  Another theatre was built on this in-between site and took the name The Gaiety in 1868.  George Edwardes took over the management in about 1886 and in the 1890’s introduced the new style, now known as Edwardian musical comedy, which was very successful, especially the dancing Gaiety Girls.  Then the Aldwych redevelopment happened.  The Gaiety was demolished in 1903 and rebuilt on the new Aldwych corner site.  More success followed but by 1939 it was run down and so it closed.   The building was damaged by WW2 bombs and was demolished in 1956. Arthur Lloyd has a magnificent page on this theatre.

From Londonist we learn "Before the Gaiety was torn down {1956}, however, some of the internal fixtures from the auditorium were mysteriously saved and now grace the upstairs bar of The Victoria pub near Lancaster Gate tube."

This section lists the memorials where the subject on this page is commemorated:
Gaiety Theatre

On this site stood the Gaiety Theatre, built in 1903 for impresario George Ed...