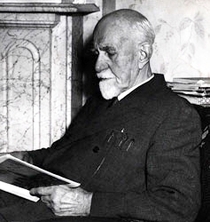 Inventor. Born in Mill Village, Nova Scotia. While working for the Central and South American Telegraph and Cable Company he became tired of using hand-operated machines to send messages. He came up with the idea of a typewriter-like machine, into which data could be punched direct to paper tape. He moved to Glasgow to develop his idea, and although being told there was no future in his project, in 1902 he managed to secure an order for twelve machines from the General Post Office. The Daily Mail adopted it for transmitting news items from London to Manchester, and in 1920 the Press Association set up a private news network using hundreds of his teleprinters.

The invention of the teleprinter/teletypewriter/teletype/TTY involved many people in a number of different countries, but Creed was early to the field and seems to have been successful in the mass production of equipment.

Died at home in Croydon.

This section lists the memorials where the subject on this page is commemorated:
Frederick George Creed

Trustee of The Memorial Gates Trust. Harpinder Singh Narula was born in Dece...

It unites collectors, scholars and museum professionals interested in the his...