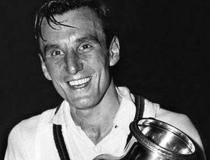 Lawn tennis and table tennis player. Born Frederick John Perry at 33 Carrington Road, Stockport. Table tennis was his first sport and he became world singles champion in 1929. Between 1933 and 1936 he won every amateur tennis title, including the Wimbledon singles champion three times, the last British player to do so. On turning professional in 1937, he was virtually ostracised by the British tennis establishment. He moved to the U.S.A. in 1938 where he pursued a career in coaching, writing and broadcasting. In 1940 he lent his name to a range of sports clothing which is still popular to this day. Died in hospital in Melbourne after falling while attending the Australian open championships.

This section lists the memorials where the subject on this page is commemorated:
Fred Perry

A horse race course built by entrepreneur John Whyte. It was not a success pa...