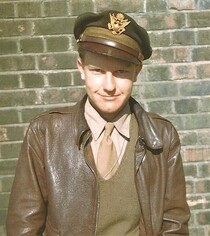 Captain Frank Raymond Boyles was born on 24 July 1920 in Syriam, Burma (now Thanlyin, Myanmar), the younger son and second of the three children of James Richard Boyles (1886-1970) and Marie Caroline Boyles née Wiegand (1884-1974). His father was a clergyman and a missionary.

According to the United States Federal Census in 1940 he was residing in Denver, Colorado, USA, but our Picture Source states he was living in Mount Vernon, Westchester County, New York, USA and travelled to Tulsa, Oklahoma, USA to undertake training as a service pilot. He enlisted in the Royal Air Force Volunteer Reserve in Canada and came to England where he served as a Pilot Officer in No.121 Squadron based at RAF Kirton in Lindsey, Lincolnshire.

On 16 September 1942 he transferred to the 335th Fighter Squadron attached to the 4th Fighter Group in the Eighth Air Force of the USAAF and was based at RAF Debden, Essex. On 26 October 1942 he was promoted to the rank of First Lieutenant.

He married Norah J. McGrath (b.1922), the marriage being registered in the 2nd quarter of 1943 in the Saffron Walden registration district. On 1 September 1943 he was further promoted to the rank of Captain and on 16 October 1943 he was transferred to the 65th Fighter Wing.

He was killed in action, aged 23 years, on 8 April 1944. He was last seen at the start of a big dogfight in the area of Celle, Germany, and was shot down whilst flying the North American Aviation P-51C Mustang aeroplane, serial number 43-7098. He was buried in the Ardennes American Cemetery and Memorial, Rte du Condroz 164, 4121 Neupré, Belgium and is also commemorated on The Anglo-American Memorial, at the Anglo-American Playing Fields, accessed from the car park in Catons Lane, Saffron Walden, CB10 2DU. He was awarded the Air Medal with 3 oak leaf clusters and the Purple Heart.

This section lists the memorials where the subject on this page is commemorated:
Frank Boyles

Tsunami in the Indian Ocean