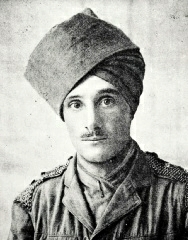 Soldier. Born Frank Alexander de Pass in Kensington. He was a lieutenant in the 34th Prince Albert Victor's Own Poona Horse Regiment in the Indian Army. On the 24th November 1914, he entered a German 'sap' (covered trench) near Festubert, France, and while being bombed by the enemy, destroyed a 'traverse' (an angled part of a trench, designed to reduce casualties in the event of a shell strike). He also rescued a wounded man who was lying exposed to enemy fire. The next day, he was killed in a second attempt to capture the trench, and was posthumously awarded the Victoria Cross on the 18th February 1915.
He was the first officer of the Indian Army to receive the medal, and is also credited with being the first Jewish serviceman to be thus honoured, although a similar claim is made for Leonard Keysor.

We think it likely that Crispin de Pass, also on the Bevis Marks memorial, was a relative, possibly a brother.

This section lists the memorials where the subject on this page is commemorated:
Frank A. de Pass VC

Yehidim or, more usually Yehudim, comes from the Bible and means the Kingdom ...

{Beneath an image of a Victoria Cross medal:} Lieutenant Frank de Pass, 34th ...

An informal Indian nationalist organisation founded in 1905 by Shyamji Krishn...