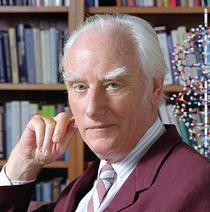 Molecular biologist. Born Francis Harry Compton Crick at Holmgarth, Holmfield Way, Weston Favell, near Northampton. He met James Watson at Cambridge in the early 1950s where they worked on the structure of DNA, publishing their results in 1953. 1962 awarded a Nobel Prize with Watson and Wilkins, for their work on the theory of a double-helix structure for DNA.

In 1977 he became Kieckhefer professor at the Salk Institute, California. He was awarded the Order of Merit in 1991. Died in the Thornton Hospital, San Diego, United States of America.

This section lists the memorials where the subject on this page is commemorated:
Francis Crick

A prime meridian. Established by Sir George Airy. By 1884, over two-thirds of...

Invented by Dr John Venn.  We think the attached picture does an excellent jo...