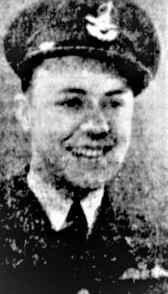 The 1921 Census of Canada shown him living in Winnipeg, but by 1935 he was shown in school year-books in both Loyola and Santa Ana, California, USA. After graduating from the University of Southern California in Los Angeles he trained to become an aviator in the United States Navy at Pensacola, Florida but when the Second World War broke out in Europe he joined the Royal Air Force Volunteer Reserve. His service number was 83701.

The London Gazette dated 4 October 1940 shows that he was granted a commission for the duration of hostilities in the rank of Pilot Officer on probation with effect from 2 August 1940 and he was attached to No.71 Eagle Squadron. The London Gazette dated 19 September 1941 showed that as a Pilot Officer on probation he was confirmed in his appointment and promoted to the substantive rank of Flying Officer with effect from 2 August 1941. Unfortunately, this promotion was published nearly six weeks after his death, and all the following information refers to him as a Pilot Officer.

According to the American Air Museum in Britain website, he died, aged 24 years, on 9 August 1941 when, flying a Supermarine Spitfire, serial number P8572, it dived into the ground near Ongar, Essex, although the RAF Commands website gives the location as Greenstead, Essex.

At the time of his death his nationality was not known with any certainty. His British Air Ministry records stated that he was born in Winnipeg but his death was notified to the American Foreign Service in London as he was believed to be an American citizen. These records show that he died in a flying accident at about 2.00pm on 9 August 1941 near Ongar, Essex and was buried at 2.30pm on 13 August 1941 in Plot 20, Row B, Grave 19, next to that of Pilot Officer William Richard Driver, in the Brookwood Military Cemetery, Dawney Hill, Woking, GU24 0JD.

He is also commemorated on the Commonwealth War Graves Commission's website.

This section lists the memorials where the subject on this page is commemorated:
Flying Officer Kenneth Samson Taylor

Inventor. Born in Mill Village, Nova Scotia. While working for the Central an...